Yesterday Steve Sailer noted today how Chelsea (nee Bradley) Manning’s gender dysphoria, having gone from footnote to forefront during his incarceration along with the rise of the trans rights movement, is now seen by fashionable convention as a legitimate sympathy factor favoring President Obama’s commutation of his sentence, as evidenced by the New York Times: 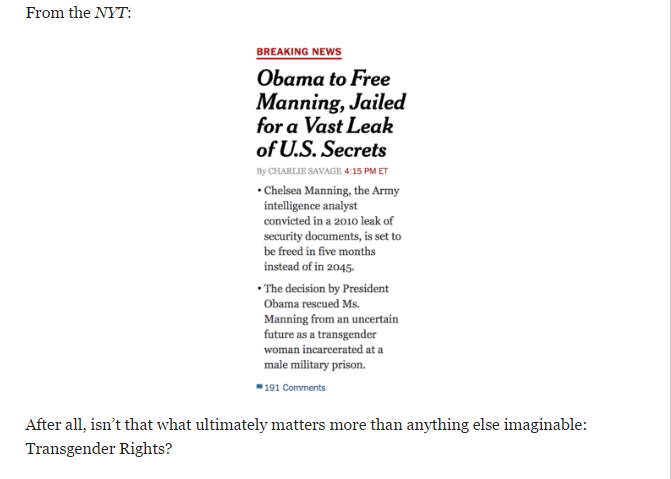 It’s a cliche that politics are mostly, if not entirely, about social identity, as individuals vote in line with their perceived in-group values and needs. Needless to say, in the US social identity in politics and beyond has so long been pathologized for whites and encouraged, even romanticized, in minorities until it has become unchallenged convention that majority interests are inherently suspect and white interests nonexistent or evil. An astounding notion. It’s hard to say how much of this is cynical manipulation and how much is the obliviousness of the elites’ true-believing middle management corps.

In a nation with a dominant ethnic majority social identity politics arrange along class lines. In ours for a long time now they’ve arranged themselves around ethnic (now sexual and sexual preference) identity. Obama promised his election would transcend this. There was a curious, very un-progressive appeal to order inherent in it; even, that progressive bugaboo nostalgia played a part (reeling from something like a national identity crisis after President Bush squandered so much national prestige in his ill-fated Iraq invasion, we were encouraged to revisit what has become, however stupidly, our imagined greatest achievement–black civil rights.) We would be one, finally by squaring the circle of racism.

Over his time in office we’ve come not only to see the impossibility of this, but the fact the elite wants nothing to do with it. Division is the point–diversity after all means division. It was social identity for me but not for thee, white people. This is what half the country rejected with Trump’s election.

With the reaction to Trump’s success–itself a reaction to this long process–this shaming dynamic of de-legitimizing white majority interests and valorizing minority interests reached its nadir, and, after a half century of unopposed triumph, it failed grandly in last year’s presidential election. Maybe the de-legitimization of white interests represents less a transformation of politics than the death thereof, part and parcel of the surrender, led by Buckleyite conservatism in America, to the globalist order that is at the moment reeling from the one-two punch of Trump and Brexit. The interests of white Americans and Europeans were the very problem, it is now openly declared (though it’s important to note this would have been considered insane at the beginning of this progress of slow-walking us to our demise), as witnessed by American slavery and the Holocaust. Now it isn’t just populism that is the  enemy, but the population–to be corrected by the demographic diversification of that population into competing ethnic groups under an imperial multi-pole represented by Washington DC, New York and Brussels.

It’s part, maybe the essential part, of that death of meaningful democratic politics in the West. As Kevin Grace said, “politics, as conventionally understood, died in that bunker in Berlin when Hitler put a bullet in his brain.”

But politics go on, divorced from policy and meaning (for it remains to be seen if the Trump phenomenon, as much as anything else an insurgency against this order, will pan out). And that means politics as advertising. Advertising itself is advanced political method. And advertising is less about social identity–that gauche recognition of practical reality and real interests–than it is about aspirational social identity. Buy this product and display your status, or front a higher status, or even ascend thereby to a higher status (for perception is all–politics has taken this quite to heart). Status of course includes moral status–show your social “awareness” by buying “green” or “non-conflict” diamonds (wealth and virtue combine in the ultimate display).

A short conversation with the average anti-Trump civilian will quickly illustrate for you how much politics have become, for the fashionably conventional, aspirational social identity striving.

But with the transformation of Bradly Manning, hero or traitor, to Chelsea Manning, unassailable virtue-victim, represents a new aspect of social identity in politics. Now we are expected to identify and apply a premium or penalty depending on the social identity of the subject class or individual. The classes warranting a political, cultural and–apparently now with official recognition of Manning’s identity–can only be expected to grow (and compete with each other), while the classes for which a penalty is applied will remain static (and shrinking along with demographic and cultural change): white, male, straight. This does not end well–unless we end it now in defiance, somehow.

One thought on “The Curious Case of Bradley’s Button”