Is it a cliche yet to contrast California’s (old) Utopian aspirations with its dystopian present? It should be. The latest police shooting to be turned into a financial and political shakedown even raided the local NBA franchise with success. Protesters shut down two games and the team responded by partnering with BLM and something called the Build. Black. Coalition. Somehow that name perfectly sums up the movement, shutting things down over and over again. We stutter along.

A city council meeting was shut down by a grandstanding surviving brother. Apparently he also practically climbed into his brother’s coffin at his brother’s funeral-media event, reminding me of the old joke about the usher at the funeral who says “keep an eye on the widow, she looks like a climber”.  The Washington Post’s account tries to soften what you see in photos and video, but it’s pretty remarkable the license being granted the enthusiastically bereft brother, who should probably be in jail. 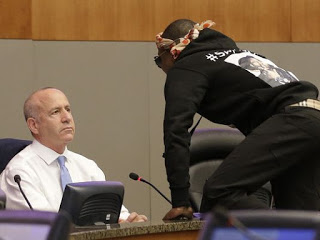 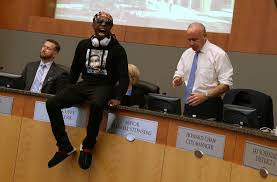 A broadening coalition of the fringes addresses the problem::

Sheikh Omar Suleiman, an adjunct professor of Islamic studies at Southern Methodist University in Dallas, was the keynote speaker at a town hall meeting at the Salam Islamic Center. The event was co-sponsored by CAIR-SV, Sacramento NAACP, Sacramento Area Congregations Together and a coalition of 10 mosques from throughout the Sacramento region.
Suleiman is scheduled to participate in Thursday’s memorial service for Clark, who had converted to Islam. During the meeting, he and a panel of local faith and community leaders urged an audience of more than 200 people not to let their fervor for justice die, but to fight against what they described as systemic injustice.
Too often, Suleiman said, people don’t mobilize because they don’t recognize that when one minority group is targeted, all are affected.

Clark’s conversion is probably not being looked at too closely by the Imam, who seems to have carved out a sweet niche marketing himself as a moderate Muslim promoter of interfaith dialogue (with a death threat from ISIS to boast of) and Muslim advocate, which included leading a campaign to censor google searches to combat “Islamophobia”. There’s your interfaith dialogue.

It’s notable not all immigrant groups produce religious leaders purporting to lecture us on “systemic injustice”; some take to it more easily than others. It–political activism–doesn’t seem to be correlated with IQ. Higher IQ groups are naturally going to be more able politically, but I don’t see Asian American groups yet allying with the left’s fringe, focusing more on straightforward advocacy.  US Muslim groups look far more eager to ally with what Steve Sailer calls the Coalition of the Fringes. Somalis look from here like a low-IQ, high–let’s call it Political Quotient, or PQ, measuring a tendency to purely political endeavor–group. Somalis are low IQ/high PQ. Compare to, say, Japanese Americans, who I would expect to be high IQ/low PQ. Yer IQ/PQ ratio is key, I tell ya.

Sheikh Omar joins Al Sharpton and Benjamin Crump on the scene. These things play out like a loosely scripted television show, where the actors improvise within a given scenario. Except here there’s no desire for spontaneity, and the thing plays out with rigid predictability. They don’t need no dialogue to stick to the script.