Ruptly is reporting National Guard troops are now on the streets in Portland, per Kate Brown’s authorization, but it appears to be Border Patrol and other federal agents making arrests–in response to antifa’s broadening its attack to include the federal courthouse. The governor issued the order June 1 declaring the fifty troops would be “unarmed” and “behind the scenes”, wrapped in a lot of Summer-of-Orange-Man-Bad supplication.

But antifa may have miscalculated in taking on the feds, who don’t need the city government’s approval to defend the courthouse and the federal building, which sit on either side of the besieged Justice Center.

Farther down this path is the possibility of a conflict between federal and local authorities over the monopoly on violence in Portland–we’re in our second month of declining law and order.

The U.S. Attorney in Oregon announced federal charges Tuesday against seven protesters who are accused in court papers of defacing a federal courthouse and assaulting federal officers during protests in Portland, Oregon against racial injustice and police brutality…

U.S. Attorney Billy J. Williams said in a statement that U.S. Marshals Service deputies and officers from the Federal Protective Service, Homeland Security Investigations, and U.S. Customs and Border Protection have all been on duty protecting the courthouse.

Before this unmarked federal agents in tactical gear had emerged from the building to arrest at least two demonstrators trying to breach the boarded-up glass front. US Marshals are tasked with providing security during normal times.

Portland police are also being reinforced now with sheriffs and cops from other jurisdictions.

Nightly antifa continue to rally around the stump of the Elk statue they bagged, so to speak, when the city was forced to remove it. Antifa should have a bronze elk head mounted on their clubhouse wall to commemorate the feat. 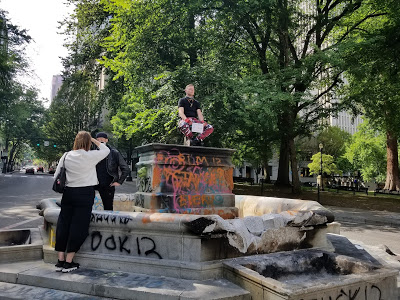 Last night was relatively subdued but typically malicious. A citizen got too close to their road block and had his tires slashed.

Every night is a kind of open mic night, as people give speeches and even sing through bullhorns, everyone auditioning for attention.

It was in the early morning hours of May 30 I witnessed them setting up the first roadblock outside the Justice Center. Who knew this was going to blow up like it has? 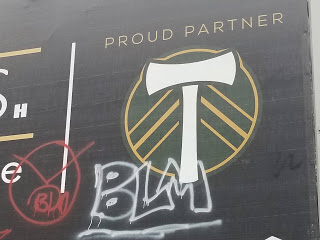 Prophetic coincidence? “Proud Partner, BLM” soon to be a thing?