President Trump, the ultimate political outsider, is a far better politician than executive. 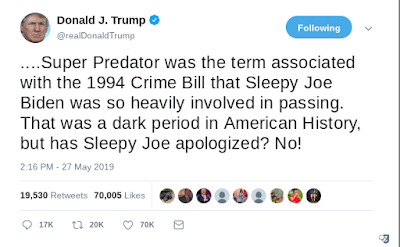 He may be hopelessly ineffective, he may be abandoning patriotic immigration reform, he may be selling out to the neocons out of exhaustion or stupidity, but his trolling remains on point.

After immigration the issue most responsible for his election was law and order. It’s hard to imagine his election to president without Obama’s second term of racial demagogy and rioting. Support for police was a popular theme.

The crime bill makes political if not moral sense. The political utility of the bill was almost certainly a leading factor in Trump’s embrace of it. It’s politically clever, but morally disastrous. He accepts the very premises upon which Obama-era demagogy is based. This is a little case study in democratic corruption and the limits of political trolling–to win election Trump adopts the Democrats’ most corrosive and dishonest narratives, the lie of a legal system biased against blacks. He helps, incidentally, the progressives in their effort to establish a sort of privilege for blacks in the criminal justice system.

Politicians hate him because he’s not one of them. But Donald Trump has spent his life campaigning, on behalf of Donald Trump. He was born a politician.