The hike around Our Lady of Guadalupe Trappist Abbey in rural Oregon is fittingly peaceful and doesn’t feel like the geography around the Columbia River Gorge where we’ve done most of our hiking this (very) warm season. It isn’t dominated by the towering evergreens that are everywhere here. (Not so towering in our Gorge stomping grounds now, after a massive forest fire set off by a kid with fireworks took out tens of thousands of acres a couple of weeks ago.)

Apparently the monks are out there on riding mowers maintaining the broad lawns that buffer the retreat from the forest:

These fields would otherwise be tall, dry grass right now, so mowing them is probably a wise fire control measure. The effect is lovely either way: 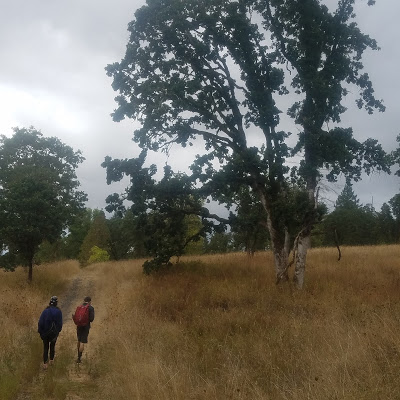 We came upon something strange while we were there. Someone had set up a small camp/shrine of sports memorabilia, cut-out silhouettes of children and religious objects: 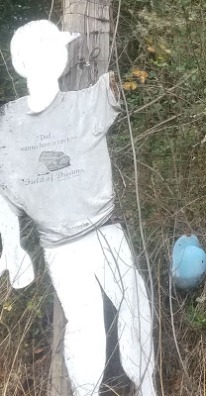 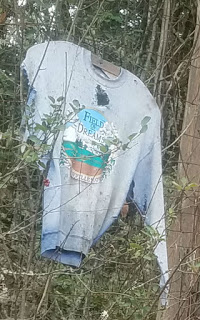 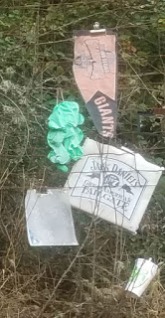 Inside the tin was a pristine copy of a sports magazine. 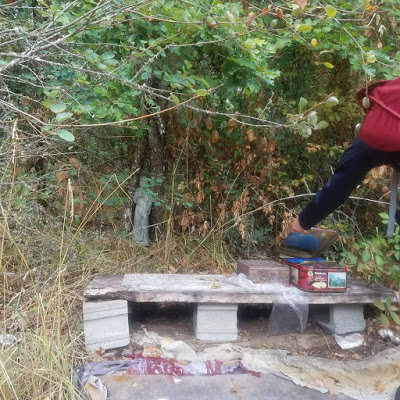 All this appeared to have been out there in the elements a while and was just off the trail. For some reason the monks allowed it and leave it alone. The effect is unsettling.

All I could think of was Ace Ventura: “Finkel, Einhorn, Einhorn, Finkel…”