Forgive me for presuming to know something about humor, despite being neither a professional humorist nor a critic. But I’m going to join the growing ranks of rank amateurs who think they understand comedy, for the purpose of denouncing them. Irony!

Humor’s base material is irony and absurdity. It depends on the recognition of these things–sometimes psychologically repressed, sometimes socially and politically suppressed–that is our shared experience. It isn’t enough for a gag simply to be ironic or absurd; it has to reveal these things in its subject, whether that subject is conventional wisdom, a common human foible or a specific event of notoriety.

It does that by confounding our habituated expectations. It’s in the way a joke leads you along a narrative path to an unexpected but still logical–and above all true–conclusion, similar to the way jazz confounds the resolution of melody in novel, complex ways to the delight of the listener. The resolution–in humor, the punch line or central idea behind a gag–must be unconventional but not discordant. It has to ring true. The greater the gap between the expectation of the set-up and the resolution that is the punch line, the greater the satisfaction. Ideally it’s the surprise revelation of an inherent truth. At its very best, it exposes a lie we’re all forced to endure.

The more that narrative set-up is cliched, kitsch, or best of all the more false it is, the better raw material it makes for satire or parody. If that narrative is an outright lie, skewering it on the lance of humor transcends comedy and becomes something like enlightenment. If that lie is perpetuated by the powerful for purposes of control, humor becomes something like political dissent.
Humor succeeds when it mockingly reveals dishonesty and fails, as it so often does in our politically correct times, when it obliviously advances dishonesty.

Humor transgresses. A comedy club is akin to a safe place for a religious ritual allowing the temporary indulgence of transgression. Comedy provides catharsis for the emotional tension built up by the commonplace. Conventional wisdom and social mores necessitate a certain amount of hypocrisy (some more than others). Baggage. Baggage we need to relieve ourselves of, if only for a moment. They don’t call it comic relief for nothing. Of course now we have an elite and entertainment class that is hostile to the mass, and this beneficial process has been co-opted for the deliberate destruction of the old social mores, of the idea of common mores itself. The process of leveraging comedy to destroy culture is wearing comedy itself down. We laugh a lot now, but our laughter is more shrill, more cynical, more desperate. The joy is slowly being wrung out of it.

This all occurs to me when considering the rash of ill-conceived but well-received attempts at humor inspired–in a same-day flash that was hasty even by Internet standards–by Ahmed’s notorious clock. By now any thinking person can see Ahmed wasn’t the passive victim of prejudice but the active proponent of a gag. A humorless gag–Ahmed did not deny his suckers the expected resolution; he gave it to them in heavy-handed earnest. The result was not to expose commonplace dishonesty, but to reinforce it. It’s the antithesis of the comedic gag that confounds our expectation and reveals the truth; it gives us precisely what we expected, with the purpose of creating a fiction. It’s a first-rate con job (I haven’t the heart to acknowledge we’ve been taken in by a second-rate con).

Ahmed provided the morally insecure with something they crave, moral outrage. He played to their vanity–something I’m sure a professional con-man would say is essential. And being the product primarily of vanity this moral outrage is as false as the hoax that prompted it. The very premise supporting Ahmed’s con–of a pernicious “Islamophobia” that threatens to consume us–is false. Ahmed bamboozled an entire nation, with its willing, gleeful participation, and that willing participation is the real crime.

The greater guilt lies with these willing marks, who are legion and include the most influential among us. If sanity were to somehow magically reappear, and the nation as a whole was suddenly able not only to see clearly the fraud but to soberly reflect on its effects, we would have to conclude that our president and the titans of industry who opportunistically submitted to the hoax for their own personal and political ends are not just wrong, they’re reprehensible.
What they would have you believe obscure authorities did to a fifteen year-old boy–that is falsely accuse and traumatize him out of hasty prejudice–they do to the nation as a whole. A nation that already reels from the unrelenting project to slander its history and dismantle its core, of which Ahmed’s hoax is a sort of synecdoche, the part representing the whole. In their enthusiastic participation in Ahmed’s hoax, they reveal their determined participation in that broader project.

But the extent of the hysteria, its reach into the upper echelons of culture, media and politics, acts as an oppressive fog. The severest criticism of this high crime seeks only to correct the record, allows itself to be distracted by the “overreaction” of the Texas authorities, when those who use their influence to assist in the hoax should be subjected to censure, ridicule and moral condemnation. Because of that fog, that overwhelming din of a million shrill voices advancing the lie, I think even those elites engaged in the fraud don’t understand the extent of evil in their actions. Our elites are moral zombies who unfortunately retain their effectiveness in everything but their ability to recognize moral consequence and evil.

But to return to humor. Most of the reaction was painfully unfunny–Ahmed’s most earnest suckers are decidedly not amused; even as their condemnations resembled something like revelry. He who holds the social justice high ground always doth protest too much, and in this case the protestations continue like a week-long, drug-fueled rave.

But a great many took it as an occasion to demonstrate their comedic chops. Twitter (in the word of one true-believer oblivious to the irony) “exploded” with amateur comedians inadvertently demonstrating that pc not only, as Steve Sailer likes to say, makes you stupid, it makes you unfunny. Everywhere they were posing with clocks, as if to demonstrate the stupidity and (more irony) too-quick presumption of Those Awful Texas Rednecks. But the joke’s actually on them: 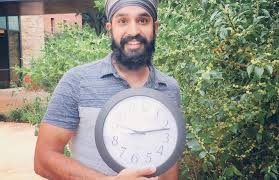 Of course the joke doesn’t work because Ahmed’s clock looked nothing like a clock. Everywhere people were missing the joke, posting photos of digital alarm clocks–just like the one Ahmed dismantled and put in a suitcase to resemble a bomb–and even traditional wall clocks, cracking themselves up at how anyone could be so blinded by paranoid bigotry as to mistake…well, there the joke fails, of course, but no one seems to notice. Context is obliterated in the desperate rush to signal virtue. So on it goes, despite the increasingly obvious nature of Ahmed’s con. Humor, like logic and empiricism, like decency, will just have to give way to Diversity and Progress.