Steve Sailer has pointed out this same young (or “military age”) fellow toting about a picture of Angela Merkel like some sort of Byzantine icon of Jesus (Ms Merkel achieves secular sainthood) has now managed to appear not once, not twice, but three times in news reports about the ongoing refugee invasion of Europe: 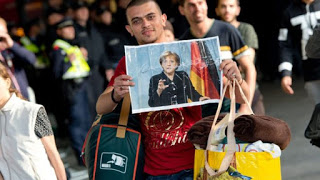 “That’s good, Dahood, but less the cheerful shopper, more the grateful pilgrim, like we discussed…”

“Okay, okay, but the light is all wrong…” 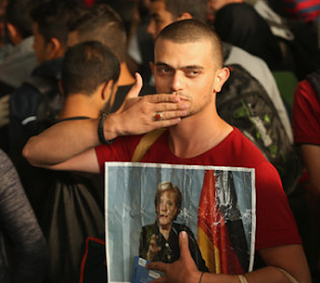 “Yes! The gesture is genius! That’s why you’re a star! Wrap and set up the next shot.”

We’ve seen this sort of thing before, in another case of the political and media elites coming together to sell the public on a desired policy, as commenter JohnnyWalker123 points out in the Sailer comment thread:

I remember back when the Serbians were supposedly ethnically cleansing the Kosovars in 1999, the television channels and papers kept showing up the same image of a refugee woman over and over again. It was bizarre how often she kept appearing. So much so that someone mentioned it on one of the major cable networks.

The eliciting of emotion to manufacture consent in this way was parodied brilliantly back in 1997 in Barry Levinson’s film about a political operative teaming with a Hollywood producer to create a fake war with Albania to distract from a scandal involving the president and an underage girl, Wag the Dog:

In the film Woody Harrelson’s Private Schumann is actually a dangerous convict from a military prison:

Likewise, any misfits who get through will be fine as long as we keep them on their meds (weed, alcohol and pussy, if my observation of Portland’s own military age Muslims is any good) and don’t provoke them.
All this production is missing now are the product placements. 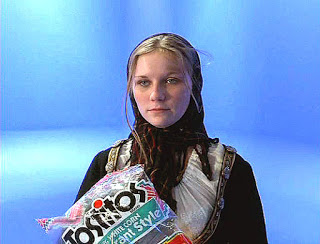 “Kirsten, we’ll add the racist mob later of course, just give us some sort of reaction to that and hold the chips a little higher…”