John Boehner’s choice of phrase in lamenting last night’s upset of Eric Cantor was a clumsy but no doubt sincere moment of pathos, unintentionally revealing the love of prestige and influence that fills the heart, such as it is, of the typical politician:

“My thoughts are with Diana and their kids tonight.” 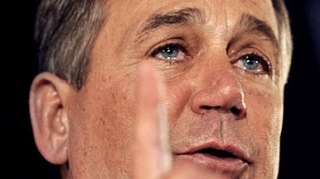 This is too hard.
Did somebody die, John?
Shudder to think of those poor kids* having to grow up in the household of a mere lobbyist. All of our thoughts and prayers are with them. Word that John was later seen in his office weeping to the strains of Whitney Houston’s Greatest Love of All could not be confirmed.

One thought on “A matter of power and death”