Steve Sailer has been speculating Shepard Fairey’s current obsession with the hijab is something of a sexual fetish, and Fairey’s choice of a beautiful woman in ruby red lipstick that might get her arrested in one of the more moderate Muslim countries certainly suggests it is, at least, for him and other young straight male social justice warriors:

But I think it emerges from a Platonic fixation on the hijab going back a few years now. As a practical matter, the hijab makes “Muslim” an immediately discernible identity for inclusion in the ubiquitous Bennetton-style imagery of the Diversity movement. Otherwise you’ve got an uncertain Mediterranean type who could be a mere Italian, yielding next to nothing in Diversity Pokemon points.

To find an image immediately discernible as Muslim it becomes slim pickings once you’ve abandoned the hijab; you’re left with such as the unattractive, literally and figuratively, Angry Muslim Beard Man 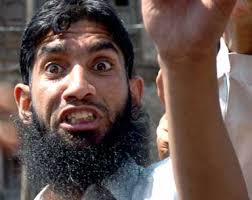 whose inclusion destroys the purpose of presenting a positive, non-threatening image entirely; he’s been memed so much by shitposters I couldn’t even find the iconic original image of him I had in mind, without text. Fortunately the real-life Angry Muslim Beard Man has gotten around quite a bit himself–so much so I think I’ve seen a conspiracy theory out there purporting to out him as a Mossad agent provocateur; he’s everywhere on the Internet. As for Mild Hijab Woman, she’s so in demand Google images auto-completes at h.
Taken as a whole Hijab Woman is more mild-mannered in appearance than she is attractive–though she is more attractive than the real-life hijab women you see on the street, many of whom make you wonder if the full face veil option of the Burka is not solely about protecting the modesty of women but also the eyes of men

I suspect the hijab is popular precisely because it projects a comforting modesty. Hijab Woman provides a welcome, if unrecognized, mild corrective to the broader social justice movement, with its endless surfeit of gyrating gays, obese co-eds, angry androgynes in tattoos, gages, piercings and awkward, tasteless apparel.
There’s probably an unease for the socially aware person whose commitment isn’t derived from his own psychological issues–yes, I do believe they exist–regarding the affected decadence and endlessly varied bad taste that is increasingly dominant in the movement. Hijab Woman cleanses the palate in between doses of the tart, the bitter, the sickly-sweet.

One thought on “Hijab Hullabaloo”