‘Dinnertimin’ and ‘No Tipping’: How Advertisers Targeted Black Consumers in the 1970s
In an attempt to reach African American customers, many U.S. businesses began integrating their commercials—often by relying on fraught stereotypes… 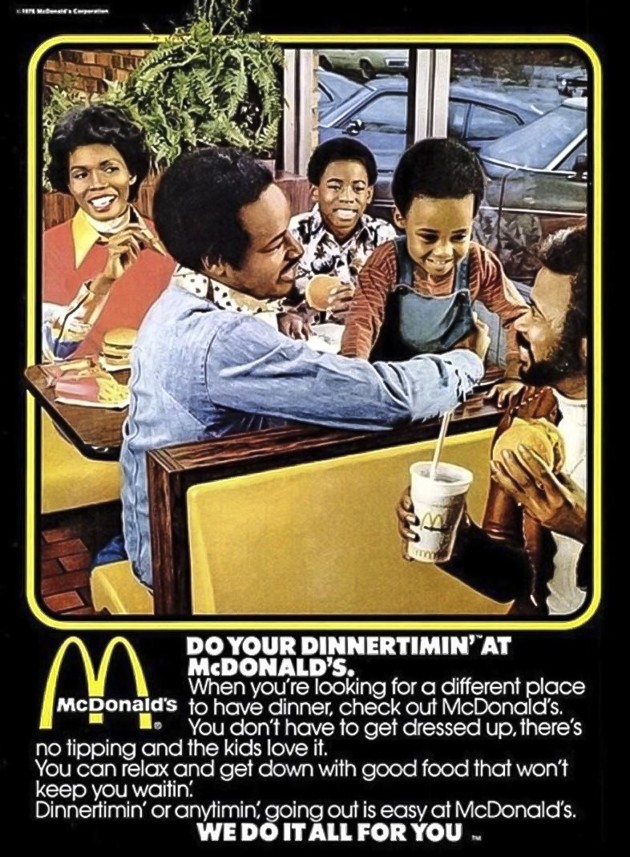 SJW’s have been getting hot and bothered over this ad that ran in Ebony and Jet in August 1976 for the last three years. NPR’s CodeSwitch responded to this ad in 2014 with: 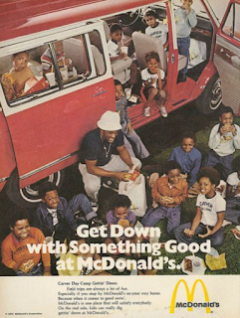 What, McDonald’s, implying they’re all his kids?

White privilege views the oppressed person of color asleep–safely inert–dreaming
only of eating the oppressor’s poisonous food before the daily exploitation of his labor!

The black ads condescend toward their black targets in pretty much the same way white ads of the time condescended toward whites, in different language; indeed, as they still do now, with more polish (and perhaps cynicism). The impression an objective observer gets looking through the ads in the NPR piece is that black ads took their audience to be confidently aspirational working class, cheerful and family-oriented. They give us an interesting glimpse of that confident time when legal barriers against blacks had all but come to an end, and it was assumed that soon blacks would be taking their rightful place in the middle class and beyond. The ads, and McDonald’s seeking out of black business and franchisees, can be seen as part of a deliberate process to make that happen. To the extent black integration has failed and blacks have failed to rise to affluence on merit, these ads can also be seen as tragic artifacts of a promise unfulfilled, particularly the two above, showing young black men as hardworking and mentors of youth. NPR blowing a raspberry at them decades later doesn’t seem fair at all. The earnest progressive thinks, all the while, he is providing context for the contextually challenged. Oh the collective balls on you, social justice warriors!

But the needs of supply are not the needs of demand. The writers are driven by ambition working within an echo chamber, all trying to outdo one another in advancing the always shifting progressive line. So the line gets pushed in the direction of ever more and stricter dogma, or “progress”; the incredible rapidity of the trans movement’s advance is a result. There is only going forward now. Still, with little opposition left, social justice warriors charge into History like Soviet conscripts at Stalingrad with machine guns at their backs. There is a desperation there.

There are two prerequisites to a posture of respectability nowadays: outrage and indifference. The cultural weltanshauung feeds on continual outrage on behalf of a growing variety of oppressed groups; as a consequence the respectable must now accept a growing variety of behaviors and practices, some of which define the new identity groups, some of which are incidental to groups defined by ethnicity, but many of which are bad (and you would be allowed to notice if their recognition did not impugn the Narrative).

Communicating one’s blithe indifference to the problems of the bigoted, incapable and uptight is a means of projecting status. Only the weak, mentally and materially, worry about immigration, or black crime, or the definition of womanhood, or whatever is coming next. But conforming to current attitudes is also a way to maintain one’s self image, a necessity of vanity.
Today’s worldview provides one with the conceit of a very Western sort of duality: the independent strength of your indifference, redeemed by a tender concern for the victimized. It is, sadly, heroic.

The current political tyranny suppressing dissent demands indifference at a minimum: one can be silent (still) about dogma or the latest lynch mob, but he cannot question–and he must not mock. But indifference is also a personal necessity; there is simply too much about which one should rightly be outraged. (Our ancestors before the communications revolutions were shielded from the sufferings of people on other continents, and likely had enough of their own; we, with few sufferings our ancestors would recognize, gaze out upon the present miseries of all humanity, benumbed.)

It’s important to note ultimately what’s being suppressed are effects of theory-driven policy. Theory arising from and policy driven by nurtured outrage. Outrage and Indifference are the yin and yang of the social justice (leaving “the” in there was an editing mistake, but I like it so I’ll leave it; if I was king, “the social justice” would be its required designation).

So when the man who aspires to respectability and acceptance today is not feigning indifference he’s professing outrage. But perhaps there’s a more or less constant need for outrage, that actually varies little in size and nature but largely in subject.

But the raw material of humanity doesn’t change that drastically, and our Janus-faced social justice warrior is probably no less or more lively and vital than grandmother. Indeed, in the current state of affairs he is continually agitated by diversity demagogy on one hand and affronted by diversity’s demands on the other–demands he is continually conditioned not to think of as “demands” but debts, in arrears, out from which he can never fully repay.

He has to regard so much and much more to come which he cannot be expected to anticipate, with indifference. He is not even allowed to anticipate a point beyond which he isn’t willing to go; it is eternally TBD. We should go gentle on the deluded.

But the continuing erosion of cultural potential is the sinister subplot to all this silliness. Less and less is allowed as more and more are offended; and people are celebrating that. Progress for the left is measured in prohibitions. And progress is on the march.

One of the ads that set NPR off like a Victorian granny perfectly communicates just one of the small, vital things these people are hacking away at every day in their zeal; joy: 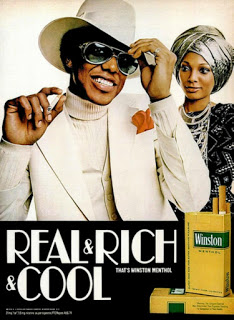 One thought on “Fraught and Bothered”